Who was ‘John Ross’? And why is his name in inverted commas? 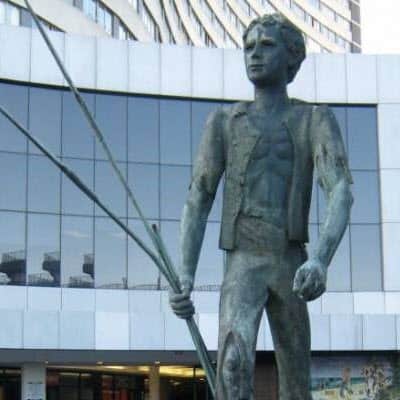 On the waterfront of the city of Durban, KwaZulu Natal, stands the bronze statue of a teenage lad. The plaque only tells us his name: JOHN ROSS Barefoot, clad in ragged clothes and carrying long hunting spears, he is framed against the massive curve of the 110 metre long, 33 storeys high Art Deco building: JOHN ROSS HOUSE.

But that’s not all; part of the north bound highway is called the JOHN ROSS HIGHWAY and the bridge that spans the River Tugela is the JOHN ROSS BRIDGE.

Just who was this John Ross? And why did he merit such  honours?

In 1827, so the old story tells us, a twelve-year-old boy set off on a 600-mile  journey through unknown territory to reach Mozambique and the Portuguese port of Delagoa Bay, now Maputo. His mission?  To obtain medicines and ship’s supplies vital for the survival of the shipwrecked crew of the brig Mary.

Not only did the boy return safely, thanks to the armed Zulus accompanying him, but he managed to deliver the necessary supplies – and for considerably less money than expected!

Even in Africa, where tales of raw courage abound, people took the boy to their heart. He was theirs – and a hero. And so it continued, far into the next century. Children’s books were written about him and in due course his adventures were depicted on screen as a children’s TV adventure.

Although history recorded little more about the boy, the original legend continued to live on, enshrined in the memory of generations of the people of kwaZulu Natal.

Work had recently started on the international star-studded TV epic Shaka Zulu. Filmed on location, a specially-constructed film set was also built not far from the original site of kwaBulawayo, Shaka’s mighty fortress.

Later it was used in the making of the ‘The John Ross Adventures’ a film made by SABC, the South African Broadcasting Corporation. Afterwards, it was developed into the heritage site of today known as Shakaland.

Perhaps inspired by the ‘buzz’ surrounding the event, historian and academic, Stephen Grey, decided to go looking for the real John Ross. Intrigued by the boy’s story, he he’d always wondered what happened to him after his famous foray into Mozambique.

Now, I do not know how he began his search- all l know is that he eventually found who he was looking for – the real ‘John Ross.’

And in doing so, he uncovered the seeds of a story far more intriguing than the boyhood legend had ever indicated.

Somewhere along the way, the writings of a ship’s master from Castries, St Lucia, came to his attention. Published in the mid-1850’s, thirty years after the Natal adventure of 1827 – could this really be the boy of the legend grown to manhood?

It soon became apparent that the author, Captain Charles R. Maclean, was in fact the long-lost ‘John Ross’. At the time of writing the ship’s master would not have had any inkling of the fame that would one day be associated with his ‘alter ego’ in far-off Zululand.

The idea of courting notoriety was clearly not a factor in taking up his pen to write of his youthful life in the land of the Zulus.  In the 1850’s, very few people beyond the boundaries of British officialdom or the inhabitants of a land called Natal would even have heard of a tribal people of south-east Africa called the Zulu. By this time, Shaka had been dead for thirty years, his triumphs enshrined only in Zulu folklore..

Another ten or twenty years later, however, and the outside world would most certainly hear of the Zulus. In fact, most of the civilised world would be both appalled and enthralled by the unfolding events and repercussions of the Anglo-Zulu War.

In 1879, Prime Minister, Benjamin Disraeli, on hearing of the death in Zululand of the Prince Imperial of France, the last link to the Napeolonic dynasty, would announce to a packed House of Commons:

“Who are these Zulus? Who are these remarkable people who defeat our generals, convert our Bishops and, on this day, have brought an end to a great dynasty?”

Africa was never far away from Captain Maclean, either in spirit or remembrance. Fiery in temperament and intensely loyal to the land, the people of his youth and the enslaved,  he remained true to the praise name awarded him by King Shaka – that of iQawu, the hero. He was that and more.

By a strange quirk of fate, Maclean’s lifespan almost exactly mirrored that  of the Zulu Kingdom – from 1815, the year of his birth and the rise of King Shaka to the year of 1879 and the fall of the Kingdom. Maclean survived it by only a few months.

In the case of ‘John Ross’ the old adage that Truth is stranger than Fiction couldn’t be more apt.